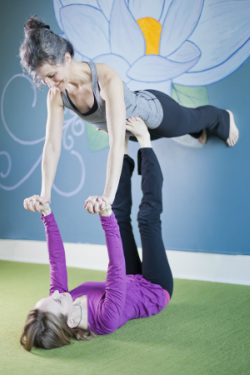 Why do you call your classes Healing and Balance Yoga? Are you no longer teaching Eischens Yoga?
I have been an Eischens Yoga Instructor for a very long time. In recent years, I have been drawn to bio mechanics and functional movement. This has shifted some of what I teach, even though by most accounts my classes look a lot like what Roger once taught me. I watched Roger and Kari adapt and change their teachings when they discovered something new. As I incorporate new understanding of how bodies function, I find myself letting go of old ideas. I have to allow my teaching to expand and change to accommodate what I know now. I felt renaming my classes Healing and Balance allowed me the space to make those changes.

Where did the name come from?
Eischens (pronounced "EYE-shins") Yoga is named after the late Roger Eischens.  Originally called High Energy Yoga, this practice was renamed after Roger's death in 2004 by a collective of yoga teachers who studied with him.  The name High Energy was confusing to those who came expecting hot yoga or power yoga and found themselves in different territory, as well as to those who avoided it expecting the fast-moving practices that have become popular in recent years.

Why haven't I heard of this style?  Roger lived outside of Madison, WI, and traveled to Michigan and Illinois to teach other teachers.  It is not a style for which a teacher can quickly become certified. Learning to see misalignment, learning how to stimulate muscles through transformation work, learning how to lead a class in this style --- all takes time and practice.  Roger's teaching partner, Kari Tomashik, has taken over much of the training of Eischens Yoga instructors in the US.  Most Eischens Yoga teachers are in Northern Michigan; the Madison, WI area; and metro-Detroit.  (To learn more about Kari, go to www.kariyoga.org)

How is Eischens Yoga different from other practices?
Roger's background was in Iyengar Yoga, and therefore was already very alignment-based.  Roger then became interested in how to address the imbalances that prevented people from progressing in postures, as well as understanding the injuries and restrictions caused by those same imbalances.  By utilizing weight-resistance to stimulate under-working muscle groups, he noticed how quickly the tight, over-worked muscles released.  This use of weight-resistance to relieve tension is referred to in classes as transformation work, and is a hallmark of Eischens Yoga.
Roger also understood that you cannot work on alignment in more advanced postures. In fact, you need to already have alignment to achieve those. You will find that an Eischens Yoga class works in simple poses, but with deep understanding of how to truly wake up the muscles and align the skeleton in each asana.
The idea that how you feel after the pose is as important as how you feel during the pose is new for some yoga practitioners.  When balance returns to muscles or the skeleton, balance will also return to the breath and the energy.  Stopping to observe the effects of different parts of your practice becomes key to self-awareness, as well as a clue as to how to work on your own.

Do I need yoga experience before I study this style?
Anyone can try Eischens Yoga regardless of your familiarity with yoga.  The poses in a class are simple so the student can focus on understanding what is and is not engaged in the pose.

Would a more advanced student benefit from this style?
Absolutely.  Eischens Yoga often is a means for more experienced students to figure out why a pose still remains out of reach.  This style can give them the tools to bring more balance into their body thereby breaking through to a deeper version of a posture.  It can also bring more energy into an established practice as the poses become more alive.   And it helps the practitioner understand that parts of the practice may be depleting, and what to do with that knowledge.
Contact Lynn